Rules of the HOV Lane 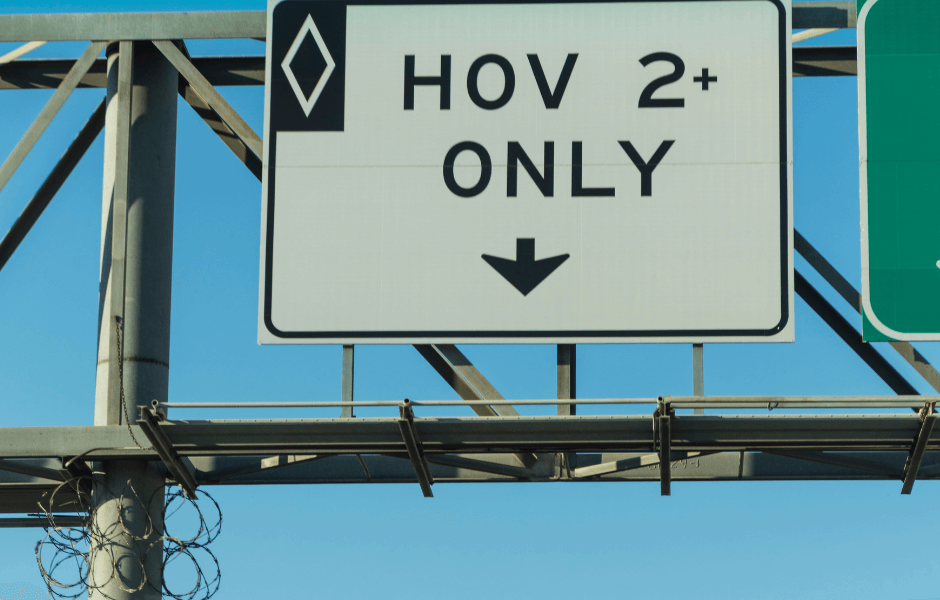 HOV stands for High Occupancy Vehicle, which means a vehicle with at least one person in addition to the driver in it. HOV lanes are special lanes that can only be used by vehicles carrying a minimum of two people including:

Apart from these, buses, especially licensed taxis, emergency vehicles, motorcycles and vehicles with Ontario green license plates are all allowed to use HOV lanes as well regardless of the number of passengers they carry.

Why do we have HOV lanes?

Having a ton of cars on the roads can lead to congestion and long travel times, not to mention the fact that it isn’t really great for the environment. HOV lanes were designated to encourage people to carpool – a great idea to help you get to your destination faster and help the environment at the same time. Electric and hybrid vehicles are allowed to use HOV lanes at all times as a bonus point to help the environment.

You’ll find HOV lanes on many sections of 400-series highways. They are situated on the leftmost lanes and are clearly marked by diamond markings on the roads along with a striped buffer zone separating the HOV lane from the others. They are also often marked by traffic signs.

You can only enter and exit HOV lanes at designated points. You will see these marked every two to four kilometres by diamonds and white broken lines. Certain HOV lanes also have dedicated transfer lanes that allow you to increase or decrease your speed to merge safely. Remember you may have to exit your HOV lane well before your highway exit.

While most HOV lanes require at least one passenger, in city areas – some HOV lanes require cars to have more than 2 people in them i.e., a driver plus two passengers. You will typically see this marked on the road and on overhead signs well before the lane begins.

If you do not meet HOV lane requirements, you will need to change lanes before the lane begins.

There are plenty of reasons why tickets can be issued for using HOV lanes. You can get a ticket for using an HOV lane if you are a single person in a car or for entering or exiting an HOV lane outside of the entry-exit markings. The penalties for the misuse of HOV lanes are severe and can include:

These penalties and fines can increase if you incur more than one ticket for the misuse of HOV lanes. If you use highways with HOV lanes on a regular basis, you could accrue demerit points fairly quickly. FIX-A-TICKET Legal Services, we pride ourselves on knowing how to fight different traffic tickets to save our clients from incurring demerits which also helps you with your insurance premiums. Call us for a free consultation or send us your tickets today!